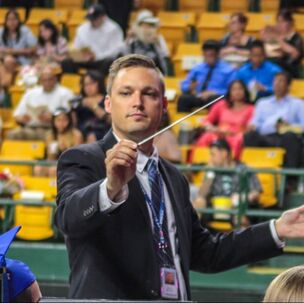 Rob Specketer is the High School Band Director at Hayfield Secondary School. Previously, Mr. Specketer attended James Madison University, where he graduated in 2012 with a Bachelors degree in instrumental music education. He began his career in Middlesex County Public Schools (Saluda, VA) at Middlesex High School, where he served as director of bands, choirs, guitar, and also taught music theory. He then taught middle school and elementary band in FCPS in the Hayfield Pyramid from 2014-2016, then at Forest Park High School in Woodbridge, VA from 2016-2019. He is currently in his eighth year of teaching.

As a 2012 graduate of James Madison University, Mr. Specketer studied Applied Trumpet with Mr. James Kluesner and Dr. Chris Carrillo. He performed with the world-recognized JMU Brass Band, under the direction of Mr. Kevin Stees, at the North American Brass Band Championships in Louisville, KY (2009), Raleigh, NC (2010), and Cincinatti, OH (2012), and at the 2012 US Open Brass Band Championships in Chicago, IL. He also joined the band in a tour of Austria and Germany, performing in concerts in Vienna, Graz, Linz, and Munich. He has performed along-side the Madison Brass, JMU's feature faculty brass quintet, in concerts at JMU and at the Kennedy Center for the Arts in Washington D.C. As a member of the Marching Royal Dukes, Mr. Specketer marched in the 2008 Macy's Thanksgiving Day Parade in New York City, and the 2011 New Year's Parade in London, England. He was also a featured soloist in 2008 and 2009, and served as Drum Major in 2010. Mr. Specketer also participated in the JMU Wind Symphony, JMU Symphony Orchestra, JMU Chamber Orchestra, and the JMU Jazz Ensemble. 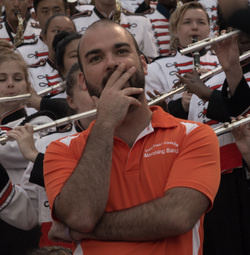 Andrew Clifford is the band director at Hayfield Elementary and the Middle School band director at Hayfield Secondary School. Previously, Mr. Clifford attended James Madison University, where he graduated in 2011 with a Bachelors degree in instrumental music education. Mr. Clifford attained his masters in Music Education at George Mason University in 2018. He  taught for three years in Alleghany County Public Schools as the Director of Bands at Clifton Middle School and Assistant Director of Bands at Alleghany High School.

After leaving Alleghany County, Mr. Clifford moved to Washington D.C where he taught elementary and middle school band as part of the Garwood Whaley Music Program.  Following this he became the Director of Education & Special Events at District Music Academy where he taught private lessons, preschool general music, and provided music therapy in retirement homes.

Mr. Clifford has had an active playing career. In 2010 he spent a month in Venezuela working with the El Sistema music program and in 2013 toured Austria and Germany with the JMU Brass Band. Mr. Clifford also performs with the Fairfax Wind Symphony and the Fairfax Jazz Band. 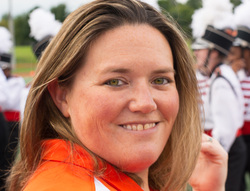 Beth Morgan - Drumline Instructor
ejmorgan@fcps.edu
​
Beth Morgan is a professional percussionist and music educator in DC, Maryland, and Virginia. Currently, she is the Band Director at Carl Sandburg Middle School  in Fairfax County. She is also the percussion director at Hayfield Secondary School and the Front Ensemble instructor at West Springfield High School.

Ms. Morgan earned her Bachelors of Music in Music Education from James Madison University. There she studied percussion with Bill Rice and Joshua Smith. She earned her Masters of Music in Percussion Performance from George Mason University. While at Mason, she studied with John Kilkenny, John Spirtas, and Joe McCarthy. Ms. Morgan has also studied with Al Merz, Bill Messerschmidt. and Dan Helm. She was a participant in the Leigh Howard Stevens Summer Seminar and the Alan Abel Percussion Seminar.

Ms. Morgan maintains an active performing career as an orchestral and rudimental percussionist. She performed with the City of Washington Pipe Band from 2010 to 2013.  She is currently a tenor, snare, and bass drummer with MacMillan United Pipe Bands and the Northern Virginia Firefighters Emerald Society Pipe Band. She was a member of the 2015 MacMillan Grade 3 band that won the North American Pipe Band Championships in Maxville, Ontario. Ms. Morgan also performs with the Fairfax Wind Symphony and the Fairfax Chamber Players.Her professional affiliations include the Virginia Music Educators Association, National Association of Music Education, Percussive Arts Society, and the Eastern United States Pipe Band Association. Currently, Ms. Morgan resides in Washington, D.C. 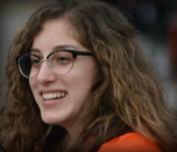 Sheir Clark is a current student at George Mason University, focusing on Music Education. Ms. Clark serves as the Front Ensemble instructor in the Marching Band. She is a proud alumni of Fairfax County Schools and Hayfield Secondary School. Sheir has distinguished herself during high school with numerous awards and recognitions. Sheir placed in all district band on clarinet, and served as section leader multiple years.

​​Rebecca Burgos - Color Guard Instructor
Rebecca Burgos is a Math 8 Special Education teacher at Hayfield Secondary. Mrs. Burgos attended the University of Puerto Rico where she received her bachelor’s degree in Elementary Education and majored in Special Education. She is currently pursuing her master’s degree at George Mason in the area of Curriculum and Teacher Leadership. As being part of an ex-military family, she has taught in 7 different states and worked with every grade level from Kinder- 12th grade. This is her 24th year of teaching, her 8th year in Fairfax County and her 3rd year at Hayfield Secondary.

Mrs. Burgos danced professionally with Gibaro de Puerto Rico for 8 ½ years. During her time with the group she toured in Europe, South America and the United States. The group also hosted Folklore Fiesta, a week where different groups from around the world joined Gibaro in Puerto Rico and performed around the island. She also coached cheerleading for 3 years and was an assistant dance instructor for 2 years.

​Mrs. Burgos has been an active part of the Hayfield Marching band for the last five years as a parent volunteer, and is in her second year as the color guard instructor. 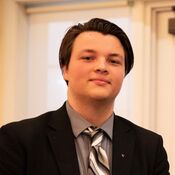 Nicholas Graziano is currently a student of George Mason University pursuing a BM in Music Education. Mr. Graziano serves as a Visual/Woodwind Instructor for the Hayfield Marching Band. He is a proud alumni of Hayfield Secondary School, spending all four years in the marching band, and three years in both Indoor Drumline and Jazz Band. During this time, he spent multiple years as a section leader and performed with the all-district band on clarinet in that same time.

Greta Wilson - Visual/Woodwind Instructor
Gretchen (Greta) Wilson has been accepted to Boise State University in Boise, Idaho where she will attend in Fall 2020 to major in Biology. Greta serves as a Visual/Woodwind Instructor for the Marching Hawks. She is a proud alumnus of Forest Park High School in Prince William County, spending all four years in the marching band, and served as both Flute Section Leader and Drum Major. She also spent three years in Wind Ensemble. Greta has distinguished herself during high school with numerous recognitions and awards for both music and academic achievements.